[ opens on outside of nuclear power plant ] [ SUPER: “TWO MILE ISLAND NUCLEAR REACTOR” ] [ shows control room where Carl and Brian are working, a sign on the wall says “NO SOFT DRINKS IN CONTROL ROOM” ] [ SUPER: “DAY 1” ] 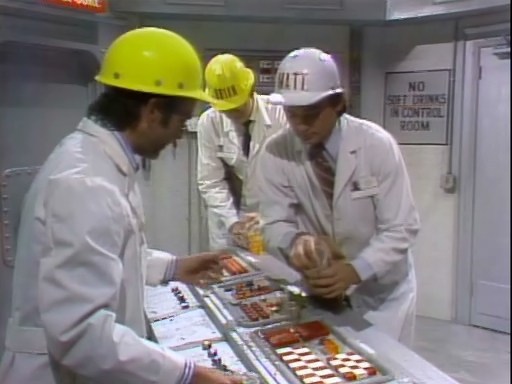 Brian: …the longest I’ve ever had to wait was about two hours. Two or three hours.

Carl: I’m gonna give up the game. You never get a court, you know, you gotta be a member sometimes.

Brian: Well, it’s the only place you can play around here.

[ Matt walks in with lunch ]

Matt: Yeah, some were here. Who’s got the vanilla shake?

Matt: All right. Now who else had a Coke beside me?

Carl: The pressure’s rising in the core.

Matt: All right. Give me a napkin! [ hands Matt a tissue, as Matt tries to clean up spill ] No, that’s a Kleenex! Have you got a napkin somewhere? Turn down that alarm, it’s driving me nuts! [ Carl turns down the alarm ] 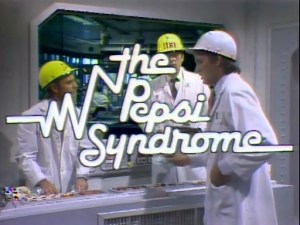 Carl: There’s been an explosion in main housing.

Brian: Listen, we’ve got to release the number three or that pump’s gonna blow.

Carl: If the pump blows that could mean a meltdown.

Brian: What is happening?

Matt: Only a handful of people know what the Pepsi Syndrome means. Maybe soon, everyone will know it.

Matt: Well, the Pepsi Syndrome. If someone spills a Pepsi on the control panel of a nuclear power reactor, the panel can short-circuit, and the whole core may melt down.

Brian: But, you spilled a Coke.

Matt: It doesn’t matter. Any cola does it.

Carl: Any cola? What about RC Cola?

[ goes to press conference at the power plant’s main office ] [ SUPER: “DAY 2” ]Ross Denton: Hello, hello, I’m Ross Denton, head of public relations for the Two Mile nuclear facility. First, I’d like to welcome all members off the press to Two Mile Island. I hope you enjoy your stay here and that you’ll come back again real soon. Now, there will be box lunches at air cooling tower #1 after the briefing, and later the buses will take you back to the motel for a special screening of the Jane Fonda film, “Barbarella”. 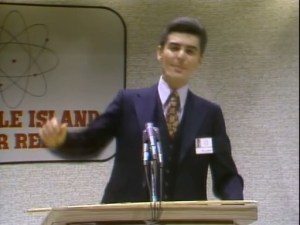 Male Reporter #1: What about the accident here at the plant?

Ross Denton: That what? Oh yes, yes, the accident. Uh, let me give you a little uh, technical, uh, background here. [ shows a diagram of a nuclear reactor pointing to nuclear energy, pointing to a toaster. ] This is a nuclear reactor. Now, the nuclear fuel here is used to generate energy here, which is sent to your homes to make toast.

Male Reporter #2: But what about the accident?

Ross Denton: I was getting to that. Sometime yesterday afternoon we experienced what we like to call a surprise. And, well, we had to release some radioactive steam.

Female Reporter #1: Well, how much radiation are we being exposed to right now?

Ross Denton: Well, I’m sure all of us here have been to the doctor and had our chest x-ray, haven’t we? Well, it’s just like that, only it’s as if the doctor had to give you the chest x-ray over, and over, and over again. Or, it’s like falling asleep under a sun lamp for a week or two! Or, it’s like drying your hair in a microwave oven! And to give you some idea of how little danger there actually is, President Carter will be here tomorrow. Now, gentlemen, I’m sorry, I’m sorry. Yes, I’m sorry I have to cut this press conference short, but now I’d like to hand the stage over to the Two Mile players! They’re a pro-nuclear mime troupe, and they’re going to perform a little skit for you, kids!

[ the Two Mile players enter and bow, as they perform their skit ]Two Mile Player #1: [ pantomimes along ] “I’m energy! Everybody wants me!” 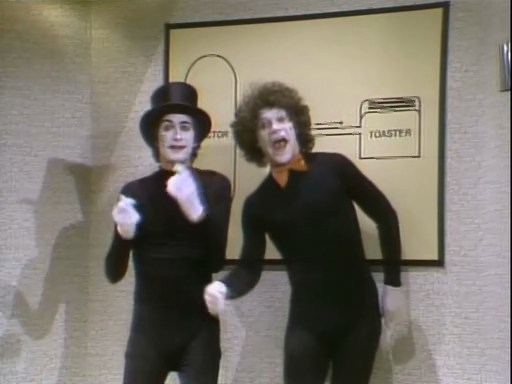 Two Mile Player #2: [ pantomimes along as well ] “I’m a short-sighted consumer! I’m against nuclear energy! But I still want my stereo, and my electric guitar!”

Female Reporter #2: [ from off stage ] Question, I thought mimes weren’t supposed to talk!

Two Mile Player #1: What do you mean?

Two Mile Player #2: I told you we weren’t supposed to talk.

[ they continue arguing, as the scene goes back to the nuclear control room, where Matt is drinking a V8 while the alarm goes off ] [ SUPER: “DAY 3” ]Matt: Would you turn that thing down? I can’t eat! [ The phone rings, as Brian picks it up ]Brian: Right, right. [ puts down phone ] Hey you guys, get that stuff away. The president is coming.

Matt: Quick! Hide the V8! [ Matt and Carl hide the V8 behind the panel, as Ross Denton enters with President Jimmy Carter and Rosalyn Carter. ] 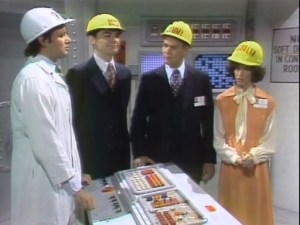 Rosalynn Carter: And a damn good one.

Ross Denton: Well Mr. President, this is Matt Crandall. He was chief engineer when the “surprise” occurred.

President Jimmy Carter: Okay, Matt. Give it to me straight.

Matt: [ nervous ] Well, the water level began dropping in the core, and the pressure neared critical in coolant pump #2, and a negative function in the control panel prevented us from preventing the, uh, minor explosion which occurred in the main housing.

President Jimmy Carter: Hmm. Sounds to me a lot like a Pepsi Syndrome. Were there any soft drinks in the control room?

Matt: Okay. You’ve got me. You’re too smart for me, Mr. President, sir. I spilled a large Coke to go on the control panel.

Ross Denton: Well, there you have it, Mr. President. Human error. No offense, Matt.

Rosalynn Carter: Well, I guess that’s it, Jimmy. We figured it out now. Let’s get out of here please.

President Jimmy Carter: Just a couple more minutes, sweetheart. I don’t get to do this everyday. Matt, right now, what is the level of radiation inside the containment vessel? 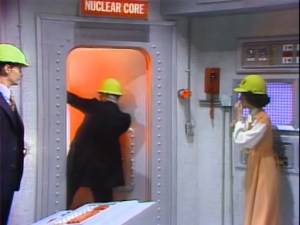 Matt: Well Mr. President, we don’t know. The large Coke knocked out all our monitoring systems, and no one’s been able to go inside of the room.

President Jimmy Carter: Well, I’d like to go in and check it out. I’ve never seen the core of a water cooler reactor.

Ross Denton: Uh, Mr. President, it may be dangerous in there.

President Jimmy Carter: Please, huh? I think I know how to handle myself around a nuclear facility. Besides, I’m protected. [ lifts his leg to reveal he’s wearing rubber boots ] I’ve got my little yellow boots on. I wanna go in and take a peek.

Ross Denton: All right. Matt, do you think it’s really safe in there?

Ross Denton: You’ve got quite a husband there, Mrs. Carter.

Ross Denton: You know, you could have brought Amy. I think she would’ve had a ball!

Rosalynn Carter: Oh well, Jimmy wanted to bring her, but well, she’s got school, and besides, what if one day, Amy wants to have children? 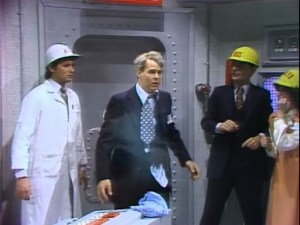 Matt: Wait a minute, do you hear something?

Matt: Okay, we’ll take care of that right away.

Ross Denton: Mr. president, why don’t you come with me?

President Jimmy Carter: Yeah. I feel a little funny. [ goes off with Ross as Rosalyn follows them, worried ]

Matt: All right, don’t worry. You’ll be fine, Mr. Carter. Just stay inside and close the window, cover yourself with some hot blankets, you know, and drink a beer or something. 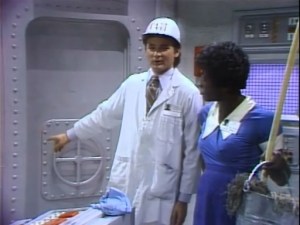 Matt: Okay, you call the gate and tell them the president’s coming up. [ Brian calls the gate ] [ Matt wipes his face with a handkerchief, as Violet, the maintenance worker, comes in with a mop and bucket. ]

Violet: Uh, you asked for me, Mr. Crandall? I just finished with your office.

Matt: Oh yeah, Violet. There’s some water on the floor in there. Would you clean it up please?

Violet: Okay, but I’ve never been in there before.

Matt: I know. We usually don’t, but it’s a mess. But don’t bother waxing, okay?

[ Violet goes into the nuclear core to mop up the water, as Matt looks on shamefully ] [ cut to research room where Rosalyn Carter is talking with Ross Denton and Dr. Edna Casey ] [ SUPER: “DAY 4” ]Rosalynn Carter: Where is Jimmy? I have a right to see him!

Rosalynn Carter: What kind of special treatment? Why can’t I see him?

Ross Denton: Mrs. Carter, this is Dr. Edna Casey. Perhaps she can explain better than I what has happened to the president.

Dr. Edna Casey: Mrs. Carter, your husband was exposed to massive doses of radiation. Now this has affected the entire cell structure of his body and greatly accelerated the growth process.

Rosalynn Carter: Well, what does that mean?

Rosalynn Carter: Well how big is he?

Dr. Edna Casey: Well Mrs. Carter, it’s difficult to comprehend just how big he is but to give you some idea, we’ve asked comedian Rodney Dangerfield to come along today to help explain it to you. Rodney? 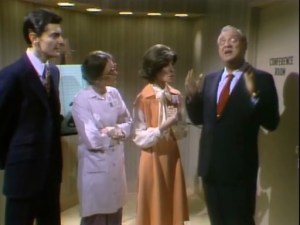 Ross Denton: Rodney, can you please tell us, how big is the president?

Rodney Dangerfield: Oh, he’s big, I’ll tell you that, boy. He’s so big that when two girls make love to him at the same time, they never meet each other! He’s a big guy, I’ll tell you!

Rodney Dangerfield: I don’t want to upset you lady, he’s big, you know what I mean? Why he could have an affair with the Lincoln Tunnel! I mean, he’s really high! He’s big, I’ll tell you! He’s a big guy!

Rosalynn Carter: No! No! No!

Ross Denton: Rodney, thank you very much. You can go.

Rodney Dangerfield: It’s my pleasure. He’s way up there, lady! you know what I mean? [ goes off, leaving Rosalynn Carter very upset ] 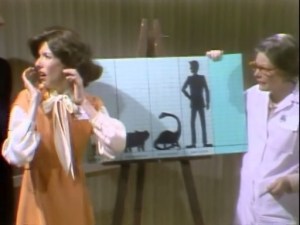 Dr. Edna Casey: Mrs Carter, perhaps this chart can give you a more precise measurement of his size. [ shows chart comparing sizes of animals ] Now the figure on the left represents Vice President Mondale. This is Tip O’Neill, Speaker of the house, Democrat, Massachusetts. This is an Indian elephant, this is a brontosaurus, and this, I’m afraid, [ pulls back flap to show that President Carter is about twice the size of a brontosaurus ] is President Carter. [ Rosalyn Carter bursts into tears, as Ross Denton lets her head rest on his shoulder ] [ goes back into press conference at the power plant’s main office, with Baba Wawa reporting. ]

Ross Denton: Good afternoon, good afternoon, ladies and gentleman of the press. First, as to the president’s condition, let me say that the president is feeling certainly “stronger” than he’s ever felt. And he would like to be with us right here, in this room if he could. I think now I’ll just open the door to questions- 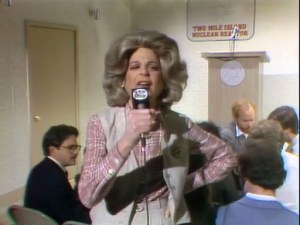 Female Reporter #1: Yes, is it true that the president is 100 feet tall?

Male Reporter #1: Yes. While the Constitution does not specifically exclude giants and behemoths from the presidency, is it not true that the Mr. Carter’s enormous size really violates the spirit of-

Dr. Edna Casey: Look! There he is! It’s the president! 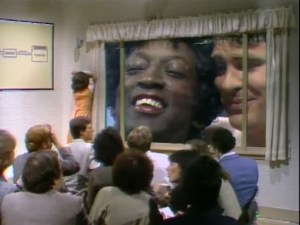 President Jimmy Carter: Good afternoon, everybody. I’m afraid that since the army clothing engineers have been unable to fit me with a giant loincloth, I’ll have to address you through this window. First, let me say that this experience has not changed my commitment to nuclear power, nor do I believe that my enormous size will in any way limit my abilities to perform my duties in my office. However, this will mean some changes in my personal life. Rosalyn, I hate to spring this on you this way, but I’d like to introduce you all to my future wife and my next first lady. She was a widow, and, until recently, a maintenance worker here at Two Mile Island. Miss Violet Crawford.

[ Violet comes in looking through the window, having also become a giant from radiation, as Rosalyn Carter hits the wall in shock ]Violet: Hi, everybody. As First Lady, I’d like to say I have nothing against nuclear power, honey. It’s the best thing that ever happened to me. [ Jimmy and Violet kiss, as Rosalyn sinks to the floor, appalled, as the reporters leave ] [ fade out ]
« Back to Stories